Bupa (British United Provident Association) was established in the UK in 1947 and has gone on to become one of the world’s leading international healthcare groups.

BUPA is a private limited firm by guarantee with no shareholders, thus it can reinvest profit back into the business.

BUPA invests its profits to fulfill its purpose, which is for us to live : longer, healthier, and happier lives.

As a Group, BUPA is in the business of providing:

"BUPA Asia" was set up in Hong Kong in 1976 and has since become leading provider of medical insurance in the local market, with around 20% of the local accident and heatlh market. In Hong Kong, Bupa has more than 350,000 members and 2,800 corporate clients.

Many of our clients are start up firms which choose the Corporate Healthnet Plus plan for 5+ staff.

* The Quality HealthCare network comprises more than 100 multi-specialty centres and around 5,000 affiliated clinics.

BUPA Asia is on the 'preferred supplier' list for HK Government Civil Servants.

NOTE: After age 65 BUPA CarePro reduces your benefit when you are most likely to need cover and escalates the premium charged at the same time:

Bupa Together provides Ward level hospital benefits to families which enrol together. The maximum claim amount in any one year is HKD1m. There is the option add outpatient / clinic benefits etc. Bupa also provides No Claim Discounts of up to 15% after 6 years.

This plan covers children (and optionally parents) from 15 days to age 18 when conversion to BUPA CarePro is guaranteed. Essential cover is Hospital only and there are options to add outpatient/clinic cover using Bupa's Qualityhealthcare network. There are optoins for Private, Semi-Private and Ward cover.

For those of our clients looking for high end health care, this product is not preferred on account of the fact it has many limitations, designed it seems, to try and discipline doctors. The most significant limitation is the cap on restiction on Intensive Care treatment of only HKD69,000 per confinement. We know of cases in Hong Kong where the Intensive care treatment bill has been more than HKD69,000 per day for some months.

Bupa's Corporate Healthnet Plus plan is community rated, meaning the group is not penalized for any adverse claim record. All Healthnet company groups enjoy a price rise that reflects the claim experience of all Corporate Healthnet customers. Other products in the market are often cheaper initially, but then if one of our staff suffers some major set back in their health, renewal premiums can increase dramatically. We once had a client company where one of their staff suffered from breast cancer and the costs in the year 2004 were around HKD1.5m for the year. Our client's premium at renewal jumped to around HKD3m from HKD1m the year before.

Corporate Healthnet Plus - Enrollment Form - 2015
Download all as zip

This plan serves as a top up to existing medical cover you may well have. You can apply for Bupa Wise Choice if :

Each of your family members has to submit a separate application.

Please note that each member can only enrol in one Bupa individual health insurance scheme (unless enrolling in Bupa Together or Bupa Hospital Cash). RENEWAL AND CONVERSION

Renewal of Bupa Wise Choice is guaranteed until you turn 60, regardless of whether you are still covered by a company health insurance scheme.

At each annual renewal of Bupa Wise Choice, you can choose to convert your membership to the Hospital and Surgical Benefit of Bupa CarePro at the same or lower benefit level without any underwriting. Be warned however, premiums for CarePro escalate and benefits reduce significantly once you turn 65. See Table above.

BUPA provides tailor made group plan, often in an attempt to match of better competitors

For as long as the group's claim ratio is acceptable, annual price increases will be in line with medical inflation (typically +8-12% in HK), but if your group suffers inordinate claims, especially in outpatient claims, you will find premiums could escalate by many times that of the previous year's premiums.

For example we had one group paying c.HKD1m in premium who had a staff incur breast cancer costs in excess of HKD1.5m in one year. The renewal premium was c. HKD3m!

The name "BUPA Global" was the trading name launched by BUPA in July 2014 to bring together a globally consistent brand for its two international operations of BUPA International and ihi BUPA. "Bupa Global" is the trading name of Bupa Insurance Ltd and BUPA Insurance Services Ltd, which are companies registered in the UK and which market the Bupa Global products through Bupa Asia Ltd.

Bupa Global has a current customer base of approximately 800,000 people in more than 190 countries, served by around 1700 staff.

In January of 2015, BUPA Global launched in Hong Kong its new international individual medical products, heralding a next chapter in the provision of lifetime medical cover.

The new plans also feature Obesity and Prophylactic Surgery benefits, which are virtually unknown in the insurance world. Prophylactic Surgery is potentially covered. For example, if you had a family history of breast cancer... you could have a double mastectomy, to reduce your risk of cancer. See below for comarison of BUPA Global health plans. 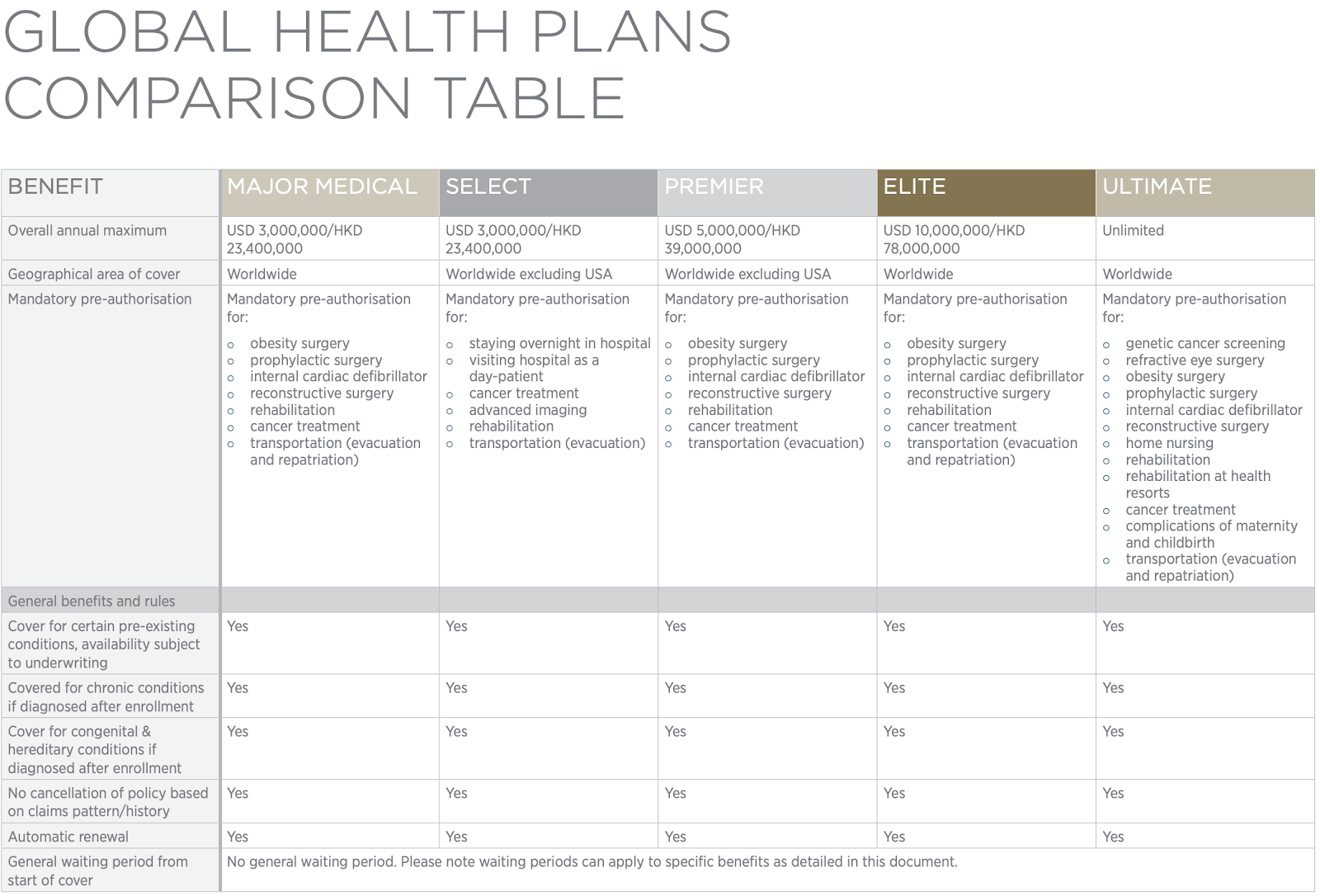 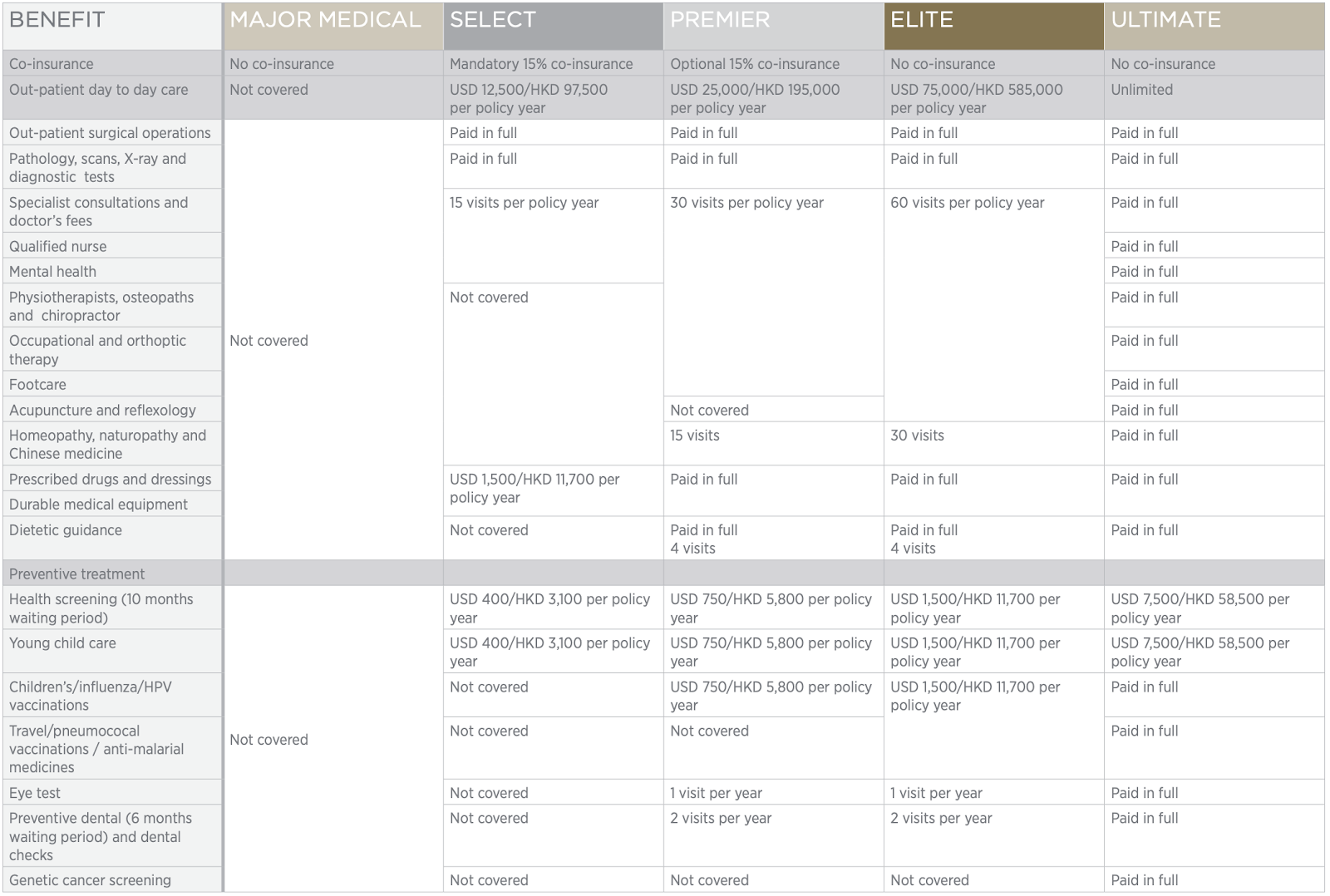 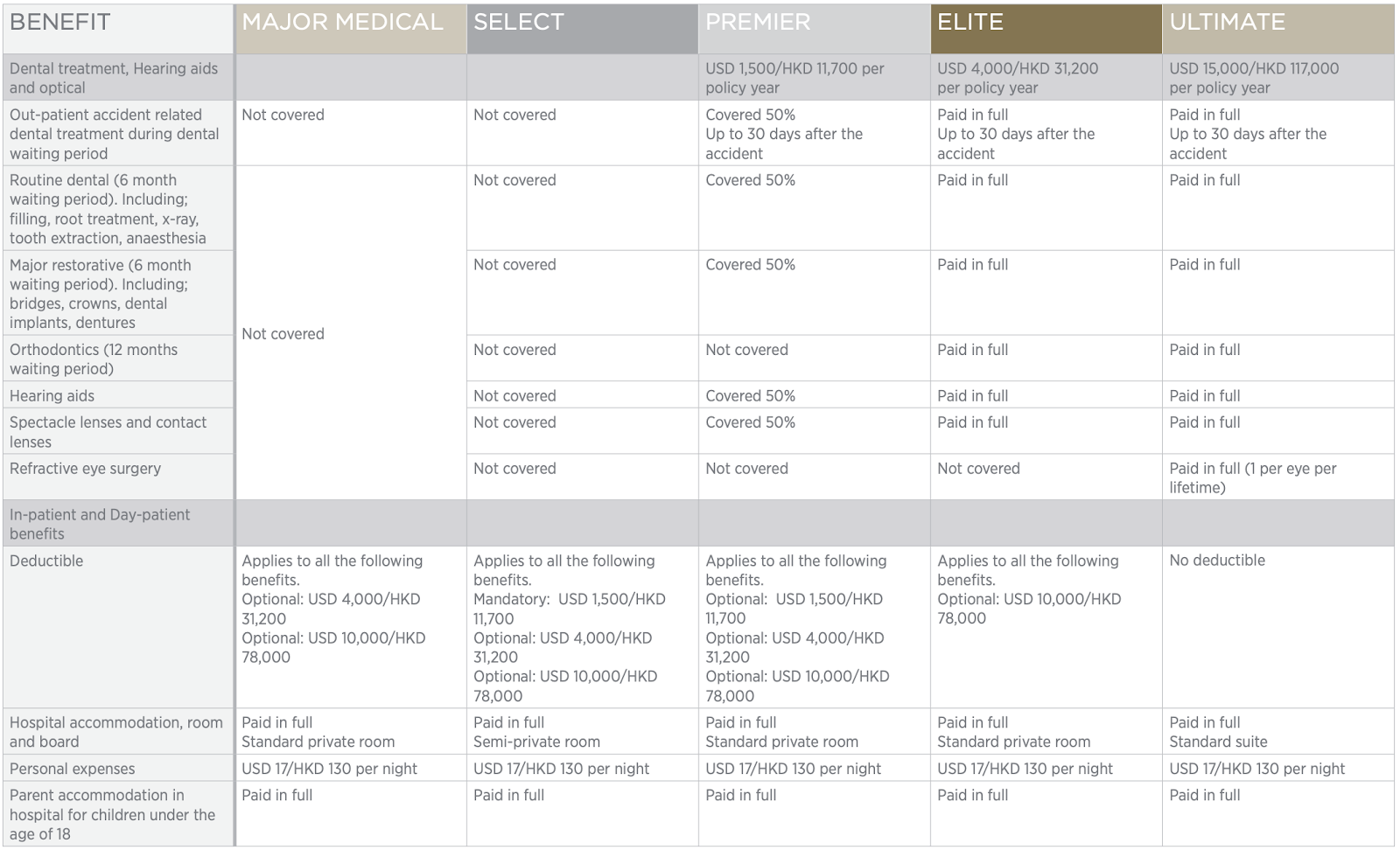 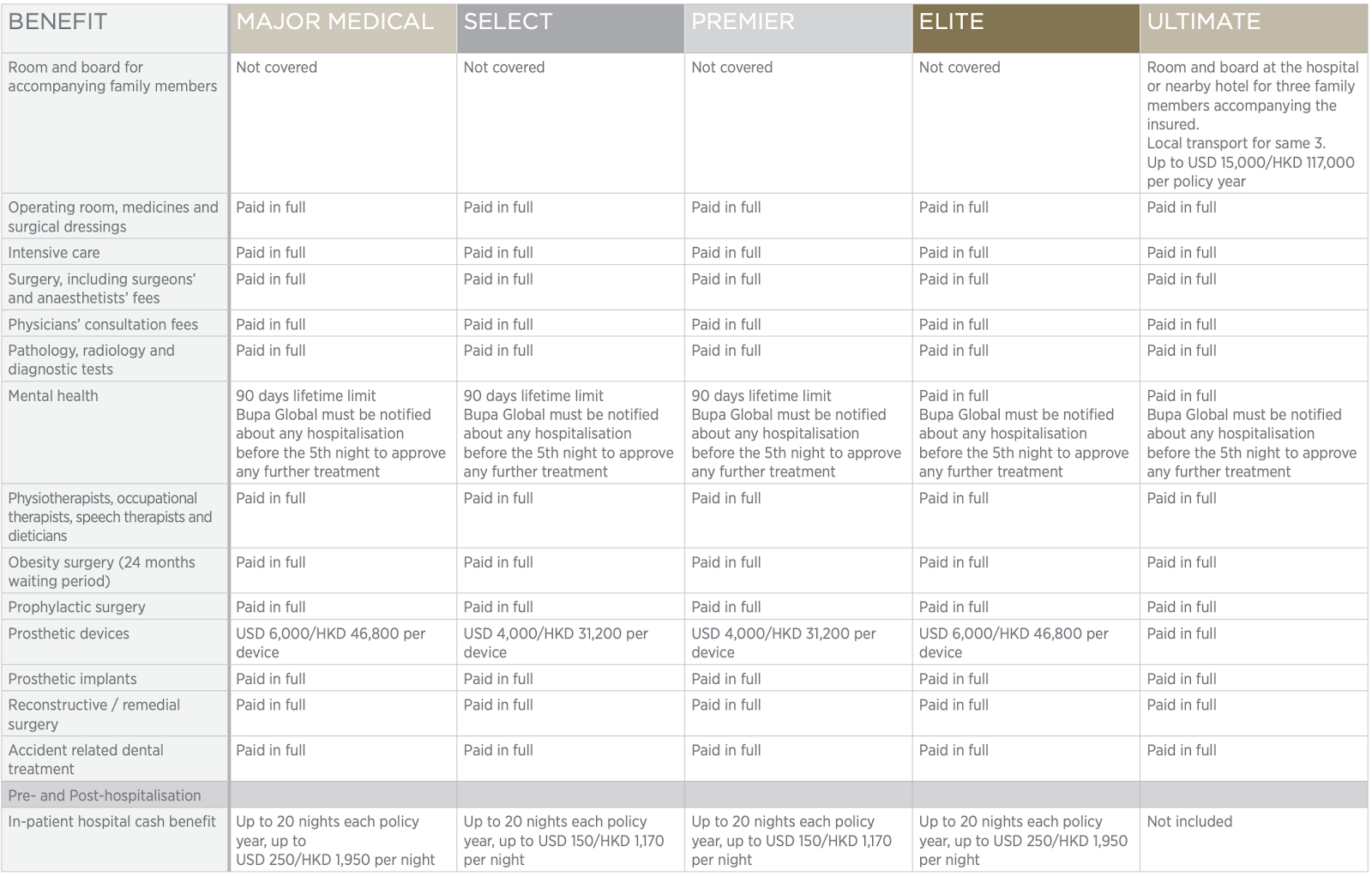 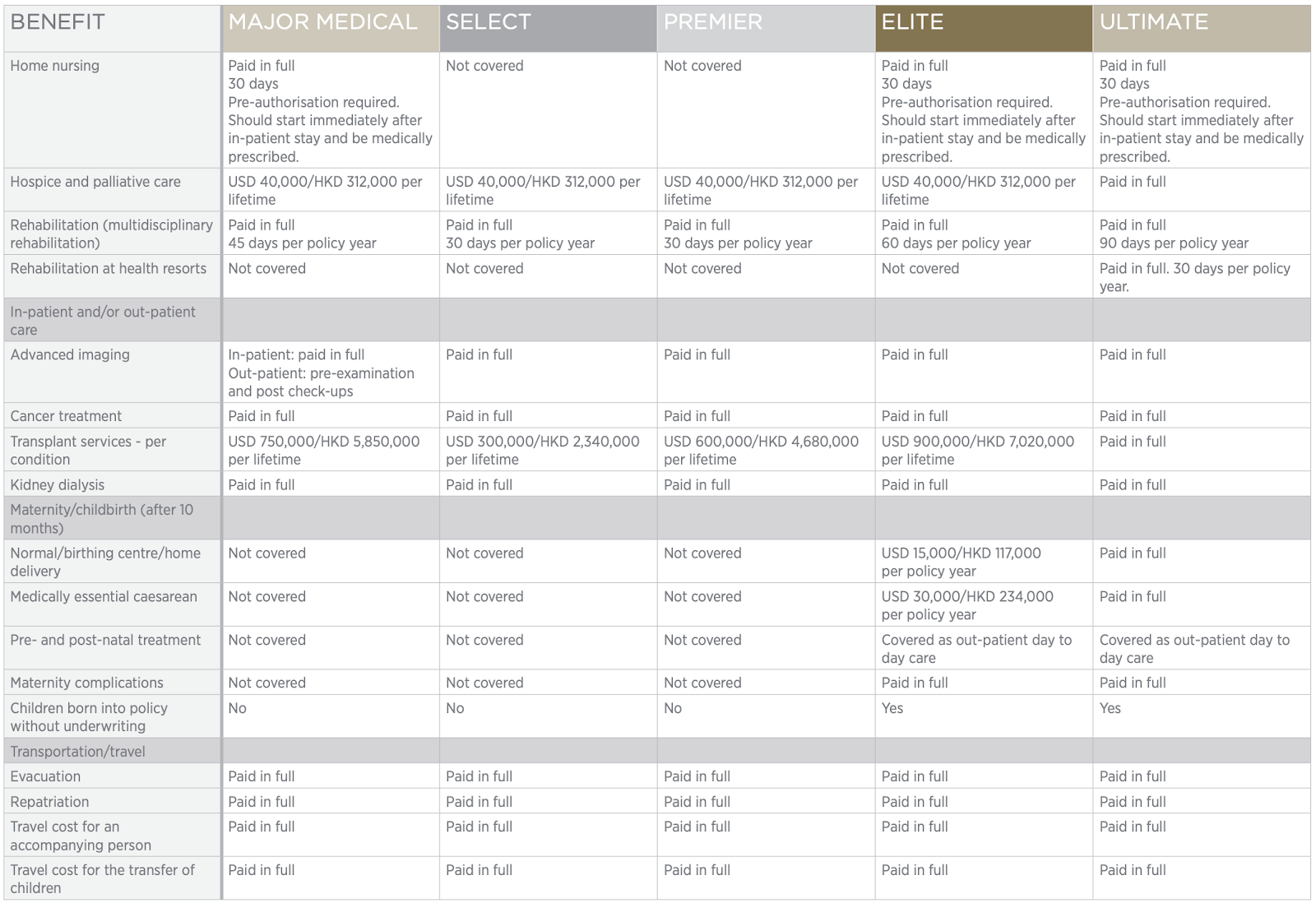 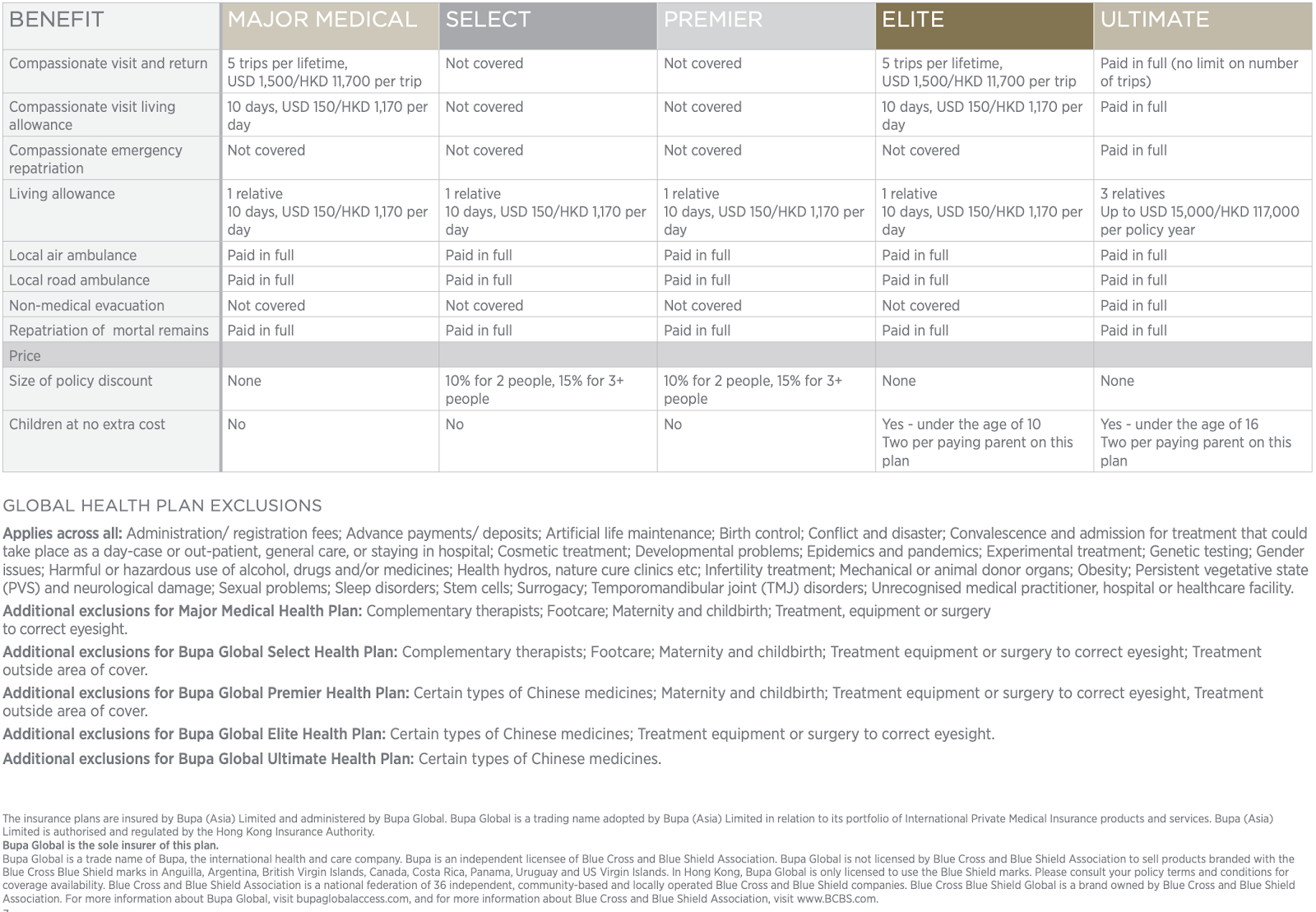 As a marked departure from the IHI products, BUPA's new range of Global products DO NOT offer cover to Americans who resettle in the US.

Brochures and policy documents have been produced in both English and Traditional Chinese and premiums can now be paid in either HKD or USD.

Along with the launch of its new product range BUPA in Hong Kong announced that its legacy individual products, ie:

were to be withdrawn from sale in Hong Kong on 31/3/2015. Only the International Health and Hospital plan (IHHP) was to be continued.

At this stage, customers already on the above individual products can remain on the plans and make amendments, such as adding a dependent or changing their cover, at renewal.

At the launch of the new BUPA Global products, BUPA explained it had refined its segmentation in order to offer propositions that addressed new segments such as travellers, retirees, students and so on and not just international professionals.

BUPA's research was based on feedback from 3,000 consumers that people also wanted to feel the insurer had some interest in their long term health, so medical check ups had to be a part of the new plans.

The new BUPA Global plans have no options in terms of whether to include dental or evacuation cover, for example.

Do note that Bupa Global currently has no product in its range that meets the requirements in Germany or Switzerland... though existing members may retain their Bupa cover.

If you would like further information on these plans please click the links below to view the plan documents that interest you:

If a staff who is covered by BUPA Global has been a group member for 3 years, then he/she willl have the option to transfer to the:

In the process, the staff will be asked

Such questions are NOT asked if transferring to BUPA Global's Select or Premier, no additional underwriting is required.

Bupa Global Travel Insurance offers extensive worldwide coverage for individual travellers.
You can choose between an Annual Multi-Trip or a Single Trip travel insurance depending on your travel pattern.
In addition to the full coverage of Bupa's global emergency medical assistance, both insurances also offer two add-on coverages:

No matter where you travel internationally, you will only be a phone call away from Bupa Global's 1n-house emergency team, providing multilingual support around the clock.
If you choose the Single Trip option, then the insurance can only be taken out for an period of at most 12 months, including any policy extensions. You can extend this short period cover with agreement with BUPA, but any illness or injury which:

shall not be covered in the extended travel period, unless the extension was made before the illness or injury occurred or had shown symptoms..

If instead you choose the Annual Travel option, then please note, it is only valid only for trips of one month's duration, unless you buy extra travel days on line.
One month is defined as a period from eg: the 5th in one month up to and including the 4th in the following month. The cover always starts on the date when you leave your country of permanent residence and continues for one month. (If the you take out the policy during a trip abroad, the one month period is still calculated from your departure from the country of permanent residence).

In case you fall ill on a trip you will not need a referral from a GP to a specialist for such things as:
but in other cases you are strongly advised to obtain a referral.
The annual travel plan has a compulsory start date of 1st of the month. The per trip travel plan can start on any day of the month. 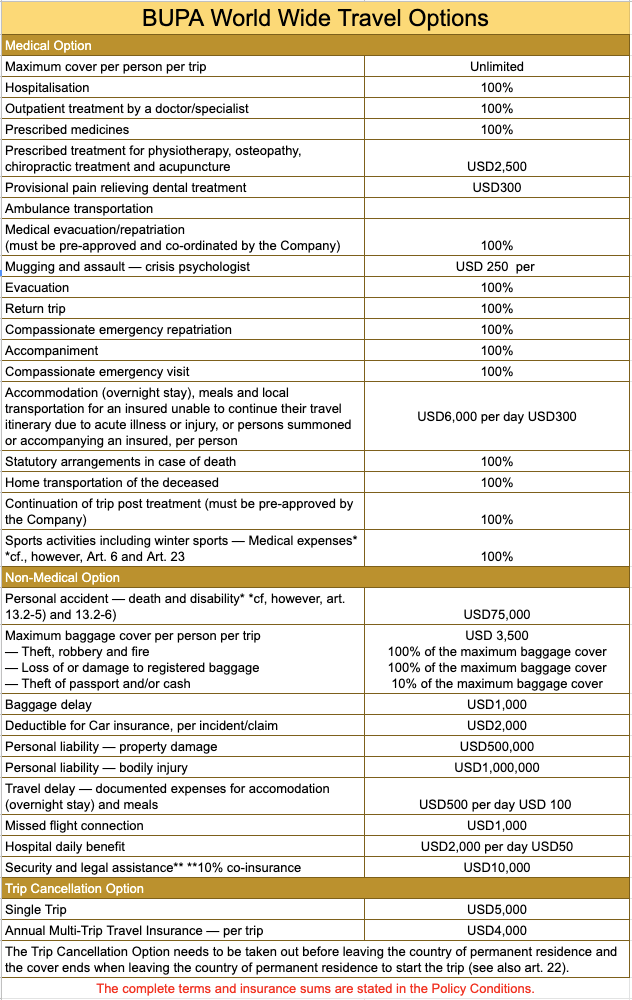 If you are trekking to the top of Mt Kilimanjaro in Tanzania (c 6,000 meters above sea level), then you will be fully covered, as BUPA's World Wide Travel Options policy only excludes mountaineering where specialized mountaineering equipment is required.

For those who engage in adventure sports, do take note of another couple of exclusions.. there is for example NO cover if you are participating in :

In a world beset by global warming and increasingly suffering the incidence of epidemics or at least threatened by them, ( notably of late, MERS, SARS and the Wuhan coronavirus), please note that there is NO cover under this policy if the epidemic has been placed "under the direction of the public authorities".

If you choose the Trip Cancellation Option, and this occurs before you book and/or pay for the trip , then the insurance provides cover in the event that you cannot travel because:

1) you or a close relative dies or becomes seriously ill or injured requiring hospitalisation, or

2) you are declared medically unfit to travel, or

3) you cannot be vaccinated due to pregnancy, or

4) because the Royal Danish Ministry of Foreign Affairs, the Danish embassy or a similar institution within the EU advises against all travel to the destination of the trip and if the situation has arisen after the insured has purchased the insurance.

BUPA access to Blue Cross/Blue Shield networks in the US

One of the reasons BUPA Global is confident to make this offer, is because in early 2014 BUPA bought a 49% stake in the GeoBlue International health operation that was owned by Highway to Health, Inc. (HTH) and promoted by the Blue Cross and Blue Shield Association as the Global health solution for Americans and others living abroad.

BUPA Global policies are now issued with two cards. One is the Bupa card and the other is a Blue Cross Blue Shield GeoBlue card which they use in the US for direct billing through the provider and hospital network.

The Blue Cross card has a number on the back for resolving any local US claim issues. Customers can also visit www.bupaglobalaccess.com to find a full database of treatment providers.

In the US customers will have access to a network of over 65,000 pharmacies where they may purchase their prescribed medications at a discounted price.

If in the US and you do present your GeoBlue Card when visiting a doctor/hospital, the medical provider (clinic/hospital) will then contact GeoBlue Team in Miami to confirm the coverage and arrange direct settlement whenever it is possible.

Please note you may be required to pay any deductible / co-insurance directly to medical provider.

Apart from direct settlement service, this card (pictured below) also enables our customers to purchase prescribed medications at a discounted price in over 55,000 pharmacies

Note 'Member ID' will be different for each insured person. For example, if there's a family of 4 insured persons under one IHHP/ISM policy, each family member will receive his/her own 'Member ID'.

This plan is also Eligible for tax deduction.

A Message From our CEO